GCA is a leading regional company in policy, business, media and communications. We provide governments, political parties, major corporations, media groups and individuals with strategic counseling on how to achieve their goals.

In addition, we provide strategic partnership counseling which involves finding the right partners for developing businesses which need fresh capitalization and latest know-how. We also provide risk-assessments and in-depth backgrounders into potential partners as well as image restoration.

GCA offers strategic advice for companies in search of US and/or EU development funding. We can advise how best to boost countries' or individual corporation's ratings within the world business and investment maps.

Development and expansion strategy are also available to our clients along with support for IPOs. Our clients, who need to fulfill stringent criteria to become major players in the big markets wish to do business with USA, EU countries, Russia and the Middle and Far East.

We provide crisis management, PR/PA services and can harness the full power of the digital world – from social networks management to latest 4K and VR technology.

We at GCA are convinced that each solution must be tailor-made to suit each individual client, involving team-work and careful methodology. Our worldwide reputation for excellence and the trust our partners place in us are the best testimonial to the success of this policy. 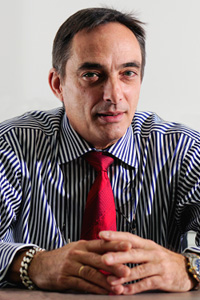 Former international reporter, is a communications expert and policy advisor. Jovan was born in Belgrade in 1953 and educated in British, Serbian and American schools. He holds an American MA in communications and media management. His fields of expertise include agency and TV journalism, media and communication development and management, as well as political analyses. Married with three children for whom he says are his biggest achievement in life.

Jovan worked for decades as a war correspondent across the globe working for CNN, ABC, NPR, BBC and other major media outlets. He ended his reporting career as a Reuter’s correspondent for former Yugoslavia covering the wars from Slovenia in 1991 to Kosovo in 1998. In addition to this he covered the diplomatic side of the negotiations on former Yugoslavia in Geneva in 1993 and Dayton in 1995.

He moved on from reporting and into the Office of the High Representative to Bosnia (OHR) in 1998. He was a political advisor in charge of one of the most sensitive aspects of the IC work – reconstruction and negotiating and facilitating the safe return of thousands of refugees and displaced persons in Bosnia. He was also tasked with restructuring RS national TV station into a PBS. Jovan also played an active role in the pro-democracy movement in Serbia and Montenegro.

Jovan joined OSCE in 2001 in Belgrade as a Media Development Advisor, tasked with streamlining and developing major media outlets. He created and implemented a strategy for transforming the state TV, RTS, into a mainstream Public Broadcasting Service.

Three years later, Jovan formed his own company, SPG, Strategic Partnerships Group which helped many a foreign company find its way and settle in the turbulent waters of Serbian transitional economy. SPG was later incorporated into GCA Global Communications Associates, designed to help Serbian companies and political entities establish better working relationships with Euro-Atlantic structures and vice-versa. He has been since 2006 a consultant to the government of Republika Srpska and its President Milorad Dodik. He is also working as a consultant to the Serbian Government and other governments in the region and wider.

GCA, with offices now around the globe, is an affiliated partner to top world lobbying, PR and PA companies like Hill+Knowlton Strategies, Quinn Gillespie Associates, Acumen, to name a few. Jovan is also a partner in Kovacic&Spaic, a politically independent outfit which has quickly risen to rank among the top such companies in Serbia and is connected to the global H+K Strategies network.

In May 2010, on behalf of East West Bridge which he co-founded, Jovan attended the Plenary Session of the Trilateral Commission in Dublin. It was the first such prestigious invitation by the Commission to an individual or organization from Republic of Serbia. He then attended all ensuing Trilateral Commission sessions in Bucharest, Washington DC, The Hague, Tokyo, Helsinki, Berlin, Krakow, Washington DC and Belgrade. He was tasked in 2012 by the Trilateral Commission to set up the Serbian National Group by 2013. This done, the Group was inaugurated at the Berlin Plenary Session in March, 2013. Jovan also attended the 4th Annual UN Alliance of Civilizations Forum in Doha Qatar. Furthermore, Jovan is a member of the World Servers Foundation, the Centre for Global Dialogue and Cooperation as well as the Circle of Forty, an organization comprising US leaders from politics, military and security, legislation, judiciary and media. Jovan is actively engaged in several professional associations in Serbia and helped draft the Serbian law on lobbying.

A former world-class swimmer and Yugoslav champion, Jovan is an avid promoter of sports in the country.